We hear every day about persons who wield their power carelessly or at least thoughtlessly, placing ego or personal profit over what is best for those who work for them or voted them in to their position. This can apply also to therapists, parents, teachers, and religious leaders who abuse those they are meant to care about. Selfishness has become god for these so-called leaders.

Obadiah lived in the pre-Christian era. He was  a devoted Jew, a prophet, chosen by God to pass on to his people what he heard from the Lord.

Obadiah was also the palace administrator. He knew and perhaps set the royal calendar. He oversaw expenses and income, the arrival of gifts and outgoing entitlements. He knew who came and went. If one worked in the palace in any capacity, Obadiah was the top boss.

King Ahab was an immature man who married outside the Jewish faith against the warnings of God. As an outsider, his wife Queen Jezebel hated the Jewish people, and especially their One True God faith.

She brought to the kingdom an unholy preference for false gods, stone idols and temples where worship rituals regularly involved the molestation and rape of children, adultery, and contemptuous disregard for human rights. These imported religious practices and values  directly conflicted with those of the faithful who worshiped only the God of Israel and obeyed laws recorded by Moses.

In her quest to destroy Jewish beliefs, she set out to kill the all prophets of God in the land. She put hundreds to death. Imagine Obadiah’s world suddenly becoming treacherous. No doubt he experienced high stress and anxiety.

Despite this, he prioritized God’s purposes (the mission) and people (other prophets and Jews) over what he considered less vital issues such as his job, reputation, and survival. He was brave. Like us, sometimes facing our worst anxieties costs us, yet produces a life change.

He used his leadership role in the palace to hide and supply one hundred prophet-fugitives in two caves. For months he was a rebel in plain sight. So easily he could have turned a blind eye as King Ahab did and allowed events to unfold unchallenged. However, if he had, self-doubt and regret would have plagued him for the rest of his days.

We know from a follow-up to his story that his anxiety did not immediately go away, even after the prophets he hid were safe. This is one example of servant-leadership. By putting people ahead of his personal interests in troubled times, Obadiah won freedom for the Jewish faith to continue. He saved the mission by his willingness to face fear.

When He had called the people to Himself, with His disciples also, He said to them, “Whoever desires to come after Me, let him deny himself, and take up his cross, and follow Me. For whoever desires to save his life will lose it, but whoever loses his life for My sake and the gospel’s will save it. For what will it profit a man if he gains the whole world, and loses his own soul? -Jesus 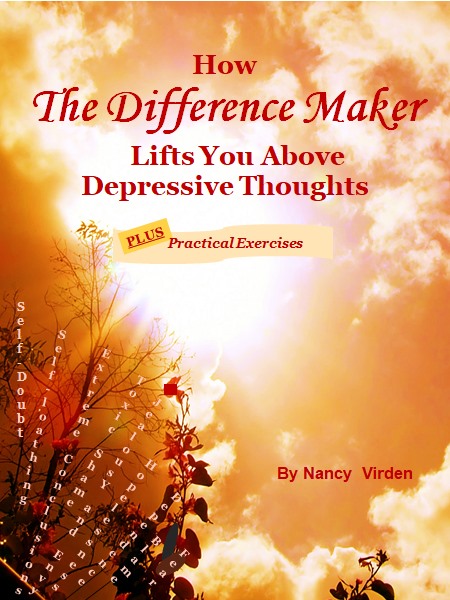 How the Difference Maker Lifts You Above Depressive Thoughts (c)2020

Always the Fight Ministries (ATFM) has been displaying compassion for those fighting mental illness, addiction, or abuse since 2012. Nancy is the founder and voice of ATFM and openly shares her emotional resurrection from despair.

NOTE: I am not a doctor or a mental health professional, and speak only from personal experiences and observations. In no way is this website intended to substitute for professional mental or behavioral health care.

If you are feeling suicidal, or concerned about someone who is, in the U.S. call the National Suicide Prevention Lifeline 1-800-273-TALK (8255), or for a list of international suicide hotlines, go here.

If you are suicidal with a plan, immediately call 911 in the U.S. or go to your nearest emergency room. In the EU call 112. (For other international emergency numbers, go here ). Hope and help are yours!