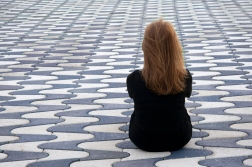 Sheila Walsh, a well-known inspirational singer, author, and speaker in Christian circles was once a co-host on the 700 Club with Pat Robertson. She practiced her faith as one who believes in healings and miracles and prayed for such as callers reached out to the show. She had hangers-on, fans, people who idolized her, and plenty of critics.

One day, Sheila broke down on the show after a guest asked her how she was doing. She was admitted to the psychiatric unit of a hospital. At least three decades later, Sheila still bravely talks about her story, exposes stigma, and tries to lead the church-at-large toward kinder support of those with mental illness.

She says that at first, she accused herself of failure for not holding herself together emotionally. She had prayed and fasted for a miracle, only for depression to become worse. Now she is grateful for mental illness because it allows her to look others in the eye and meet them where they are.

She and I share a mission and similar blessings.  It is true that with God in charge, we can hope. The following is from Always the Fight.

Major depression has been a catalyst for me to see life more on God’s terms. Because of excellent counseling, there has been a fresh application of prayer and Biblical wisdom to my old belief system. It is amazing. I am learning that what happened to me matters, getting my needs met is not selfish, and negative core beliefs can change. Other lessons include that black and white thinking is destructive, my isolation hurts me as well as others, and answering “what do I want?” and “what if?” can change unrealistic expectations into positive aspirations. Life is increasingly lived in the context of relationships and support systems instead of on my own.

Above all, I have begun to see God’s love for me as intentional and not pity. Whether any of this would have occurred to my brain outside of therapy, no one knows. Am I grateful for depression? Pain has been insufferable during episodes of it. God has had a plan all along.

Not truly having a sense of “me,” goals for my life had been insubstantial and out of focus. As they changed frequently, it probably would have been impossible clearly or surely to express any one of them. It was difficult to imagine a life dream. Now I have an aspiration. Through writing, I want to help open people’s minds to the opportunity of more effectively supporting the depressed and struggling, especially in church settings. I also hope to assist those with mental illness in recognizing their own value in God’s purpose for their lives.

Major depression has ultimately led to my attempted suicide. Still, God stays. All my hurting has served a purpose, some of which I understand. Not knowing the why does not change who God is. It does not alter his plan. Looking back affords me the luxury of tallying evidence of his faithfulness. I can live in hope because of his sovereignty.

NOTE: I am not a doctor or a mental health professional. I speak only from personal experiences with and observations of mental illness. In no way is this website intended to substitute for professional mental health care.

If you are struggling emotionally today or feeling suicidal, or concerned about someone who is, please call the National Suicide Prevention Lifeline 1-800-273-TALK (8255). Hope and help are yours.