The following is one of the stories found in They Were Real: Short Story Gateways Into the Thoughts of Bible Characters (2014)  Inspired by Mark 10:13–16 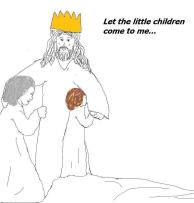 This has not happened before. Squeezing between the flapping coarse robes of oblivious adults, she slips around tiptoed feet and stretched legs to see a famous teacher. A mass of thousands hinders the whispering breeze from reaching her hot face. Voices mumble above her ears, she sees an ant trying to discover safety, and she wonders how much farther she will have to go.

A kind stranger’s soft hand lay flatly against her back giving her a slight push, and she emerges to face a haphazard circle of faces. Free to see, she looks about, glad for fresh air.

In the middle resting on table rock, the man rumored to be a healer and maybe even the Messiah is laughing and not doing much of anything else. Children play at his feet circling in a race to see whose head he will pat next. To the little girl’s mind, they are lucky to receive such attention. She watches with more awe than jealousy, recognizing they are the winners of this world and that is just the way it is.

Parents observe from close by, but not hers. She is neglected, on her own, at age six. Picking at her ragged tunic, she tries briefly to scratch off imbedded mud. Glancing around once more, she sees a forest of babbling heads and tilted shoulders with necks reaching for a better view. People who are closer are solemn and quiet. Several men are intently studying the teacher as he interacts with his youngest visitors. A woman’s voice shouts, “Lord!” Someone in the crowd calls him Jesus.

Suddenly a hush rolls backward in waves as row after row, people realize the man is standing to speak.

“Come here,” he says with his head turned in the small girl’s general direction. She pivots, wondering who might go to him. No one does.

Turning back, she sees that this time, his hand and arm are extended as he signals for a response.

Curiosity overtakes her, and her head bobs left to right. Whom is he addressing? After a few more seconds, she looks at him in pity, intending to let him know she is sorry no one is answering his call. This time, doubt is impossible.

Why is he looking at her?

A familiar uneasiness slows her breaths, her heart cautiously longing to hope but refusing to believe. He simply cannot be interested in her. Warily, she searches for movement in the crowd one more time. Then with her chin down, eyes peering up timidly, she faces this powerful and important man. Slowly pointing to her chest, in a whisper she says, “Me?” Her brain tells her this is false, even as she sees him smile and hears him answer yes. More hesitation, and then she finds herself in front of him; anger, mockery, and rejection have failed to show up in his response.

He sits back down and pats his knee.

The other children are playing a game in the dirt now, paying no attention to her. The teacher’s eyes never waver. He indicates again that he is offering his lap. Tensely, she climbs up.

Then the unthinkable happens.

He embraces her in a gentle bear hug. She has not known these sensations until now—a softhearted touch, tender strength, or being held as if she is precious. He is safe…so this is love.

For a brief instant, her young spirit senses his love’s vastness—that each person in this massive audience is his one and only, including her.

Jesus stands again, squeezing her tight, her head relaxed against his neck. “Let the little children come to me, for of such is the kingdom of God,” he says.

For the rest of his speech, she is unaware as the first peace in her short life allows her to fall asleep in his arms.

Comments are always welcome (see tab below) NOTE: I am not a doctor or mental health professional. I speak only from personal experiences with and observations of mental illness. In no way is this website intended to substitute for professional mental health care.

If you are struggling emotionally today or feeling suicidal, or concerned about someone who is, please call the National Suicide Prevention Lifeline 1-800-273-TALK (8255). Hope and help is yours.