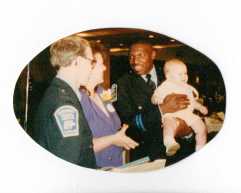 Tim, my youngest son, was born at home. This was not on purpose mind you, it was a shocking, adrenaline-packed, and scary surprise. At 1:00 AM I had a contraction.  At 1:30 AM I had a quiet, unmoving, lifeless baby boy.

The paramedics who arrived on the scene saved both me and my son, but it was baby Timothy in need of urgent care. For ten minutes he received CPR as the ambulance flew at life or death speed to the Emergency Room.

After these many minutes showing no life signs, Timothy suddenly gasped and began to breathe on his own. By the time I arrived at the hospital in a second ambulance, he was pink and responsive. The end story is that he has had no negative effects from the experience. He is now 24 years old.

The paramedic who directly worked on us asked me to keep in touch. He wanted to know how Tim’s health would evolve. He didn’t know how I would answer that request, however for the next 18 years Glenn Burks received an update in the mail on Tim’s birthday. Most years, he also received a portrait of the growing boy.

Over two decades later, I told this story to another EMT far away from where the original story took place. He was grateful to hear it, he said, because First Responders aren’t often privileged to see how they helped someone. He was just glad to know there was a happy ending somewhere!

Last weekend, an ex-EMT shared his experience with picking up a girl who was about to be committed for violent behavior. He discovered she had been badly physically abused and had simply defended herself, so he reported that. For a long time he continued to wonder what happened to her after he dropped her off at the hospital.

Some time later, I don’t recall if he said it was months or even years, a letter arrived. It was from that girl, thanking him and letting him know he had saved her life. She was doing well, had recovered, and attributed much of that to his protection. He cried as he told the story even though since that time he has finished years of schooling and has practiced as a licensed therapist for well over ten years.

It has come to mind recently that often we owe a debt of gratitude to people who are “just” doing their jobs. People who invest in us in some understated way are there even when others are not, and likely chose their field because they care.

It is because of that caring that they are also susceptible to burn-out and fatigue. Self-doubt may plague them, and their question, did I do enough? may go unanswered. Your challenge today is to thank a person from your present or past who has helped you.

Just imagine the mental health of everyone if only our world filled-up with gratitude for each other! Compassionate love takes action and gives back to the givers. This Christmas is your chance to do just that.

Comments are always welcome (see tab below).  NOTE: I am not a doctor or mental health professional. I speak only from personal experiences with and observations of mental illness. In no way is this website intended to substitute for professional mental health care.

*picture from left: EMT who drove the ambulance, me, Glenn Burks, baby Timothy. Taken one year after the emergency