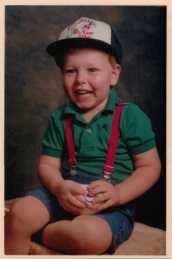 When my oldest son was three, he was sitting at the table with a half-eaten bowl of Cheerios. He had sat there awhile, I don’t remember how long, and was refusing to finish his cereal.

“Eat the rest of your Cheerios, Jonathan,” I commanded.

“Then you should not have waited to eat them. Now finish your breakfast.”

“If you don’t eat your Cheerios you are in trouble.”

His response came with more emotion this time. “I don’t want to eat them!”

Anger rose up in me. “Then you are not getting up from that table until you do!”

Yes, I heard it. Maybe I heard it before it even reached Jon’s ears. My mother’s voice. What option was available? I knew no other way to make the boy eat, and he had to eat his breakfast, did he not? I could not just throw away food because a three year-old wanted to be stubborn. He had to obey my orders!  Right?

I feared a loss of authority. How could I possibly let him win this battle? If I gave in on small matters, then he could grow up to be a terror. Only two possibilities seemed to exist. I needed to remain inflexible or else lose control of my son. He would learn to manipulate me.

Time was passing. He sat there for ten more minutes, whining and trying to get down. The scene was not looking right to me; the uncomfortable feeling continued.

The only explanation given for having to eat foods I hated as a child was that I needed to learn to like them. It hadn’t worked. Did Jonathan have to enjoy mushy Cheerios?

Normally  I would not trap my child in a chair, so why was it happening now? Clearly, breakfast had ceased to be the issue. My power play had morphed into something seemingly endless, and it was beginning to look abusive.

With a quick prayer, I let the upset little boy down out of his chair. I told him if he did not want to eat mushy Cheerios it was OK. I told him I love him, and when I serve food I want him to try to eat it, but if it’s yucky he does not have to. I did not know if I was making the right decision for the long-term. There was no doubt I was not going to force distasteful food on my child ever again. It was not a battle worth two-person martyrdom.

To this day, Jon, who is now twenty-six (and not a terror!), remembers the Cheerios incident. It was a one-time event, yet definitive enough to be a lasting memory.

I remember it also, but for a different reason. That was the day I gave myself permission to be the parent I wanted for my kids. My judgement overrode a natural human tendency to repeat the examples of one’s parents.

It was a freeing moment, one that changed life for Jon and me permanently.