Compassionate Love:Displaying compassion for those who struggle with mental illness   (c)2014 Nancy Virden 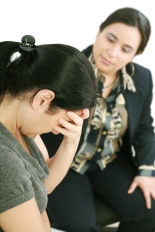 This past Sunday I began to tell you about a series of events- all parts of one story- that I’ve hesitated to share in a public arena before now.

If you are struggling or helping someone who is, my goal is to help you find the professional care that is right for you in your situation. If you are a mental health care professional, then this series may strengthen your relationships with your clients.

I wish I’d listened to my instincts while seeking out a counselor in 2004 (story 1).  As it is, there was no help for my downward spiraling mood.  By early January 2005, depression was interfering with daily functioning and choices. Painful memories swamped my mind. Two people insisted I search for another counselor.

Dee* was in her lower thirties. The first time I met with her she seemed a bit chaotic and disorganized. She asked questions between being late, leaving the office and returning, and using the phone. I sensed she was too busy for a new client. The following week she took a personal phone call during our session. Clearly she was distracted.

On the third visit she immediately sent me to the psychiatric ward of a hospital. I was afraid. She said, “I’ll watch over you. I will be in touch with the doctors and follow your case. I won’t let anything bad happen to you. I’ll be here when you get back.”

One week later, I was driven straight from the hospital to her office. She had no idea I’d been admitted and expressed surprise. This was no small misunderstanding.

New to the system, I had believed she and hospital staff were in touch. (This does not happen.) When the hospital psychiatrist diagnosed me before we met (which is not unusual as initial reports are from emergency room psychiatrists and nurses), I thought Dee had filled him in. When he decided not to give me medication or any follow-up care, I didn’t question anything because I believed she was watching out for me.

She had been willing to lie to make me go. That left me vulnerable and less capable of asking good questions. It would make sense if I’d been belligerent and refused. Instead, lying  was her first go-to.  I felt manipulated and tricked. All that had been necessary was her recommendation.

Perhaps this seems petty. After all, she did get me in, right? I didn’t die, did I?  After telling her how it felt, I received a form letter of dismissal from her and a phone call from her boss. He said,  “We cannot help you here.”

The moral of this story is don’t settle for the first name that pops up when choosing a therapist. Take the time to find someone with a solid reputation, and the skills to help.

For a variety of reasons I did not give up. Three more stories will show you how hard I tried. I’ve observed much of what mental health care is not supposed to be like. This allows me to show you and others the way to the best help.

There is hope!  Professionals with expertise were eventually found. And the search was worth it.

Trust your judgement. If you are treated with less than respect, move on.

NOTE: I am not a doctor or mental health professional. I speak only from personal experiences and observations of mental illness. In no way is this website intended to substitute for professional mental health care.

If you are struggling emotionally today or feeling suicidal, or concerned about someone who is, please call the National Suicide Prevention Lifeline     1-800-273-TALK (8255). Hope and help can be yours.