People who are proud of our midwest state and cities, and who will strike up conversation with anyone; home of Rock ‘n Roll, the birthplace of aviation pioneers Orville and Wilbur Wright, John Glenn, and Neil Armstrong, and eight U.S. Presidents; cornfields; Lake Erie; mid-size “big” cities and small towns; die-hard sport fans and this year’s NBA Championship; and more cornfields – that’s Ohio in a buckeye nut shell.

Of course there is much more, and during the Republican National Convention (RNC) this past week, the world saw the finest city Ohio has to offer – Cleveland. Yes, I am biased. Cleveland is my home, where I raised my children, and where I fit in.

Having spent six years out of my element, I learned how sweet home really is. No one looks at me funny when I strike up a lively conversation with a stranger. I can say y’all and you’zns without anyone acting like I need a better education.  It’s OK to wear a lampshade to church (odd hat party), to offer a gift card I cannot use to an acquaintance without committing an offense,  and to borrow eggs from my neighbor. This is my culture. Home.

In years past, opportunities to volunteer in Ohio have included working with people of all ages, particularly children. For years I prayed for these people, for my city, and for how I could make a difference. My prayers did not stop while away. I left a Cleveland that was struggling to survive. In the economic downturn of 2008, Cleveland was hard hit with an unemployment rate upwards of 10%. When I came back, Cleveland was building, and had scored the RNC. 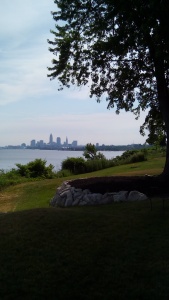 Many people I know, and plenty I do not know pray for Cleveland regularly. I am but one of tens of thousands who believe in a literal God, a Heavenly Father who hears and answers earnest prayer. In the weeks before the RNC, there were gatherings of like-minded believers who interceded in prayer for the safety of our people during the upcoming convention.

Thousands gathered at the Wolstein Center on Saturday July 16. Prayer groups gathered at key spots around the city to declare victory over violence on Sunday night. As one can see on videos and in news reports, people prayed with protesters, police officers, and bystanders. Countless others prayed at home and in churches.

The police were united, and well-trained and positioned. Our police chief prayed with an angry protester. Christian believers deescalated conflicts. It’s never a good idea to mix anger and alcohol, and bars that expected heavy crowds into the wee hours closed early. Clubs had slow business.  Accomodation for hundreds of offenders was prepared, but there were only 27 arrests.

Leaders of protest groups have said they could not get their people to come out.  The city was peaceful, outside troublemakers stayed away, and Cleveland was spared. Believe what you will, but as for me, I will continue to pray for my city.

This is full-circle and meaningful to me. I went away unhealthy and consumed with negative false beliefs about myself and the world. Cleveland was suffering and despairing with its people speaking of hopelessness. This summer, I am renewed as is my city.

Cleveland is not perfect. Racial tensions can be tough here. Forty years of busing seems to have had an adverse effect.  This is a largely segregated city with Cleveland more or less divided in half. Prayers going up for Cleveland are not only to prevent violence during the RNC, but to heal and unite our citizenry.  I believe in hope because I believe in prayer.

If you are struggling emotionally today or feeling suicidal, or concerned about someone who is, please call the National Suicide Prevention Lifeline 1-800-273-TALK (8255). Hope and help is yours.