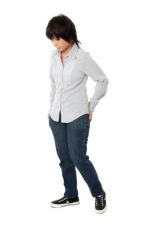 My first full day out of Intensive Care. All my reserves of physical energy and mental vigor are sapped. Perfunctory conversation includes humor and empty laughter. Meaningless voices chat amiably and some express their own sorrow. By listening kindly, I add to my hurt.

One after the other, shift followed by shift for the last three days, nurses and suicide guards rotate into and out of each room. Each asks myriad questions and offers unprofessional advice. Headaches instantaneously arise with the possibility of yet another conversation.

The tiniest of decisions, and even vague thoughts about life continuing tomorrow, cause pounding in my skull. I feel responsible, guilty, for not being friendly enough. I want people to stop asking anything of me.

Such a busy hospital ward. Why is it no one in this spinning crowd hears me desperately screaming? I once believed it was selective hearing on the part of others, yet maybe it is that I am not screaming aloud.

With suicide having become the third leading cause of death for teenagers, it makes sense there is a growing number of suicide attempts in preteens and early teens. Formal and informal surveys of high-school students consistently find that as many as 1 in 6 have seriously considered suicide, made plans to attempt suicide, and one such survey reported 1 in 12 had made a suicide attempt in the past year.**

The majority of those who complete suicide have given clear warning of their intentions. Does that surprise you? By gaining knowledge on what to look and listen for, we will be better equipped to help a struggling teenager.

What a teenager may say if they are thinking about suicide: ***

(1) Talking about dying: any mention of life being over soon, dying, or disappearing ****

(2) Suicide threats: Research teaches us that talk about suicide or threats of suicide raise the average of completed suicide by as much as 30 times.

(4) Suicide threats are not always verbal: They could appear in texts, on Twitter, on other social media sites, written in a journal, or left as notes.  Essays, poetry, and artwork are also means of expression of suicidal thinking.

(5) Saying good-bye to family and friends

(6) Expressions of hopelessness and despair:

There is a popular myth that says, “People who talk about suicide won’t really do it.” Don’t fall for it! No matter if it seems casual or an attempt at a joke, take any talk of suicide seriously enough to ask, “Are you thinking about killing yourself?” Call 1-800-273-TALK to explain the situation. They will guide you on the next, most appropriate steps to take.

Remember, most completed suicides occur after the victim left warning signs.  The next blog in this series will cover actions and attitudes you may observe in teenagers indicating they may be contemplating suicide.

Comments are always welcome (see tab below).  NOTE: I am not a doctor or mental health professional. I speak only from personal experiences with and observations of mental illness. In no way is this website intended to substitute for professional mental health care.